We aim to ship orders received by 2 p.m. weekdays on the same day
Read Our Blog   >

The Christmas Story and Advent 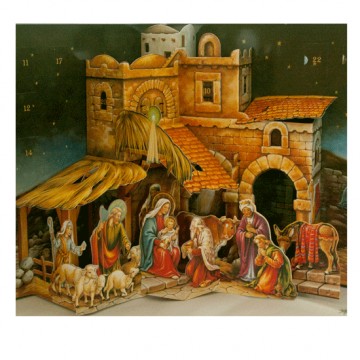 This is a guide to the Christmas Story and how advent calendars are used to count down the days in preparation for the Christmas Day celebration of the birth of Jesus.

The Christmas Story is an essential part of any Christmas celebration. For many people of many religions the reasons that we celebrate Christmas are the same - peace, family and goodwill, and the story that made it the celebration it is today is meaningful in all sorts of ways. It is a key festival in many countries around the World

It is best to start with the meaning of Christmas, and of course the literal meaning is from the two words Christ, or Messiah or anointed one and Mass which is the word for a religious festival. So Christmas is the religious festival of the coming of the Messiah.

The story of the birth of Christ is, of course, very well known, but as with any of the greatest of stories, it bears retelling, even if only in brief. Mary was betrothed to Joseph and became pregnant whilst still a virgin. For her to be with child before marriage in those days was an outrage and to begin with it must have been very difficult for the man she intended to marry. He didn't believe her until an angel appeared to him in a dream and convinced him that she was indeed still a virgin, and that the child she was bearing was the son of God. Mary had herself been told by the appearance of an angel that she was to bear a son, and that he would be the Messiah.

They were forced to travel whilst Mary was in the latter stages of pregnancy from their home in Nazareth to the town of Bethlehem to register themselves in a census. The absence from Nazareth may well have been a relief at the time as they would have come in for a lot of criticism as a result of Mary's pregnancy but the journey was hard and because everyone was being forced to register at the same time, by the time they reached Bethlehem there was no room anywhere for them to stay. After much pleading from Joseph about the plight of his wife, a kindly inn keeper offered them the protection of his stable, and they were able to use a manger as a crib for the new born baby Jesus, who was born very soon after their arrival. It is this scene, along with the shepherds, the animals and the wise men that now makes up the view of the birthplace of Jesus that we have today .

Their first visitors were shepherds, people of no status at all in the region at that time. It was to these shepherds that God announced the news of Jesus' birth through an angel and they went down into the town of Bethlehem to see the new wonder.
It is the belief of Christians that these humble surroundings and these humble visitors were ordained by God in order to signify that this "king" or "ruler" was of the people and for the people, in fact one of them himself. It was also to signify that all people were indeed equal, however humble their background, their occupation or their circumstances.

Later, some days after the birth, there arrived a number of wise men. These were men of learning and they had witnessed what they thought was the birth of a strange new star in the sky at the time of Jesus' birth. They almost certainly witnessed a supernova, the explosion of a star which is an event which is chronicled at the time and can be scientifically traced today to the time of Jesus' birth. They knew that this signified an extraordinary event and they followed the direction in which the star first appeared in order to discover its meaning. When they came upon Jesus in his humble surroundings they knew that they had found their goal and they paid great respect and reverence to the child they believed would be their new ruler. They also brought gifts of gold, frankincense and myrrh, and it is the bringing of these gifts that provides us with the tradition of giving gifts at Christmas. It is, perhaps, also one of the origins of our practise of giving gifts to new born babies and their parents. Christians believe that the gifts were again ordained by God to identify the need for all to give to each other, regardless of position or power or any other worldly characteristic of life. We now give each other gifts at Christmas in memory of this sign of a giving and loving human race. Perhaps we should all remember the origins of our Christmas festivities and the meaning behind it, and reflect on what kind of World we want it to be.

We depict this wonderful scene on some of the traditional advent calendars that we supply. These simple calendars that count down the days to Christmas, have simple pictures that are revealed one by one as a flap is opened on each of the days leading up to Christmas. It's a lovely way to interest your child in the real story and meaning of Christmas whilst allowing them to have all the normal feelings of excitement that build up as the big day gets closer.

Back to guides For all enquiries, including those regarding orders please ring us on 0800 5677850.